And when in callow youth did I….

On 09/08/2011 · 4 Comments · In music, musings
Though maybe I should, I feel no shame in offering up to the cloud this evidence of my early aesthetic (click on triangles to play) …In my rummaging through the middens of my past I have dredged up these samples of my own whimsical, musical and thezpian beginnings. It will come as no surprise to any child of the seventies with access to a TV (a significant requirement, computers not being available on a personal basis and even TVs –perish the thought- weren’t even available! in every household in those halcyon days) will have known of the Saturday morning children’s entertainment mega-phenomenon of the Krofft SuperShow .      1. Krofft Supershow , and my version:       2. fpSuperShow It’s first season (1976-77) being the area of expertise of this writer, I can remember being quite taken at the time by the installments (that season only) of Dr. Shrinker (      3. KSS Dr. –       4. fp Dr. ) 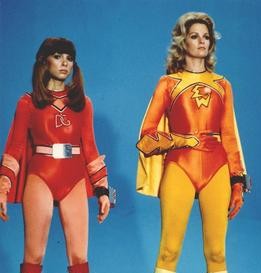 and Electra Woman and Dyna Girl (      5. KSS EWDG –       6. fp EWDG ), those particular fantastical melodramas capturing in my callow, naïve imagination, all that was wondrous and awe-full in the awaiting world. The excitement of travel to far, exotic places, the danger inherent in such a pursuit, the advent of technological dystopian enclaves being run by whack Shakespearean actors and midgets (presaging by a year -I believe- Fantasy Island). And then, o then, the Bollywood-meets-American-porno-super-heroine pastiche of EW and DG!       7. ! How my little mind thrummed with excitement!       8. !! How my little body pulsed with sexuality yet bound       9. !!! – Although, looking back, I prefer Dyna Girl by far at this point; she with her clever little electro-quips, sassy pony-tails and wide, compliant mouth!

Then there was, also from Sid and Marty Krofft, Land of the Lost (which evidently inspired a more elocutionary approach –        ), Big Foot and Wild Boy and H.R. Puffin Stuff; the Jap-animated manga cartoons Speed Racer and Marine Boy, Johnny Sokko and his Flying Robot, Ultraman! So much stuff to get a boy’s mind boggled and started on a life of absurdity –        .

Though the TV, for that year at least – our bicentennial!, only provided some of the foundation for this young man’s artistic endeavors. There was also practicing stage presence,        and        ; the first evidence of an aptitude towards composing for brass ensemble,        and a penchant for things British,        . In addition to these, more idle, childish moments, there were the rigors of my classical piano training,        and literary pursuits,        , all painstakingly captured on my gramma’s Realistic portable tape recorder (though she would have preferred a more, shall we say, pacifying and child appropriate toy –        . On I’d go until Papa came and relieved that dear old woman’s, not quite infinite, patience (she hadn’t yet gone blissfully deaf, I believe) –        . Indeed, on I’d go, as we drove away. One could always rewind and start all over again next time….

4 Responses to And when in callow youth did I….