A chapbook for a Bridge… 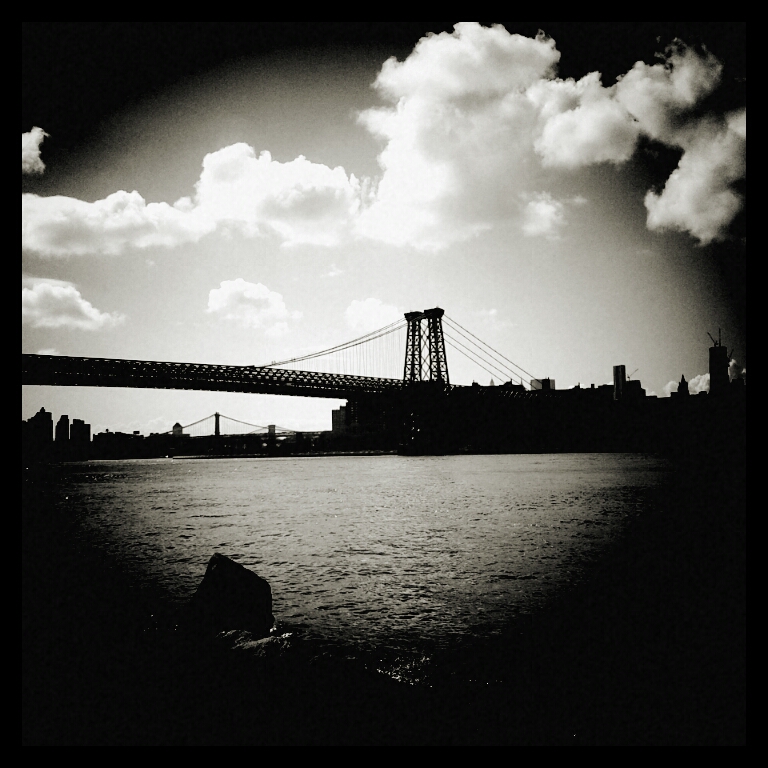 It has been a while, indeed, since last this virtual pen touched ethereal paper here to ply the waters what wash this web with tales of my diurnal wheeling over the Williamsburg bridge. I continue to do it every day. In fact I have just returned from doing it even now on this frigid New York night. 12 degrees dead read on the mercury, the living air upon living body, however, registering it more in the negative digits. A cold ride what likes to freeze the orbs right out of one’s face!

Be this as it may, I would like to compile here for Posterity – the rump of Dame Fortuna! – what previous musings had I previously upon said bridge mused musingly just a few times last summer and shared just as many times at that favored social scuttle where the many like to provide the butt – that being the so called facebook. There I placed, at first regularly, then dying out irregularly, each of the following droppings with an accompanying photo, towit:

While riding home from work today over the Billy’sVille Bridge I saw a man up ahead jogging in those tight, lycra pantaloons, and I noticed…, well, that he had pooed quite a bit in said pants! How sad, I thought, to have to stick to it (so to speak) and maintain your jog to the other side all encumbered so. My sympathy was in earnest for I too have found myself similarly in that compromised situation. Similarly, I say. As I approached, however, I noticed that the lumps in his lycra were not poo. No, it was that his butt was just shaped that way. And my sympathy eroded into mirth…

While setting off pedaling upon the Willytown bridge this eve with the Manhattan-ed, brownish dappled sun laying lightly upon my back as it slouched towards New Jersey, I advanced against the approach of the M train and thought of Mother.

Morn, crossed me the bridge
Aboard a boat I came back
The day wore short legs

this one set off a volley of haiku (as haiku is wont to do) with the dear M. Roper that ran thusly with a call to the net:

MR:  i have but one leg – hopping to the beat of spring- t’other one is wood

FP: Spring is gone, alas! – May your wood leg know better – the beat of this day

Across this wiry Willy Bridge

A jogging Jewess in her wig,

An elder, babbling with ear-buds,

The tight-assed pantalooned, no poo,

But pads built-in of jellied goo,

I dare not look into that bag!

Just cross me o’er, first up, then down

As I set out from New York town.

Across this bridge my burden borne…

Up and over, heart pounding for the effort. There are some who stand on it for gravity’s boon. I take my time pedaling seated, enjoying the legwork.

Up the incline, off the shore, over the river park’s greenway. Away from the sun, atop the river. It’s not a particularly wide one, nor narrow. The climb is well rewarded.

Down and towards, back relaxing for the relief. There are some who sit up, no hands, for inertia’s pleasure. It cools the sweat on my brow. Down past the sugar factory, ancient and brooding at river’s edge. Into Bill’s Town with old Jews, French mothers and women with beautiful backs. There are oysters and tequila.

I’ll do it, twice, again tomorrow…

I see that jogger every day. She’s persistent – like the bridge itself. She’s blonde-wigged and looks a little like a short, old, Jewish, blonde, female Mick Jagger! Which makes sense because Mick Jagger looks like a (taller) old Jewish lady not in a blonde wig. She jogs in a long-sleeved striped shirt and a (long) skirt and… She’s persistent. Like the bridge.

And I? Persistently pounding across, likewise every day, like a mail carrier – “neither snow nor sleet nor gloom of night…” – I haven’t actually headed to work in any of those conditions…not yet. Though, I don’t think I’d mind. But as persistent as my wig-ed friend am I!

Does she think of me when she gets home? Hell, no! I am one of hundreds of bicyclists who pass her every day. And indeed she is one of hundreds of joggers that I pass. But there is something about this long-skirted specter in the same clothes every day, seen almost always from behind, like Norman Bates’ mother, until… And similar to Mrs. Bates the gradual rear-ward approach to this slight figure causes mounting suspense (even still) towards the discovery of the face, the identity and age of which remain concealed, cloaked as they are in wig and odd vestment, until just coming abreast. Then, an irresistible look askance and….

Today, though, I was a little late on my crossing and saw her (is he really a her?) coming back the other way. It was Mick!

It’s not that this particular bridge is more special, per se. Indeed, the Manhattan and Queensboro bridges are more beautiful; the Brooklyn more popular and famous. But the Willyburg bridge is certainly the bridge of the people. At least all these people.  So many join me back and forth each day on their respective ways to drudgery or diversion. Each an individual. Almost all are solo and determined. They are a complete cross-section of New York’s humanity. Each day is different. Today, for example (for that’s all any of this is) there was: a mother on bike with her daughter riding behind in a kind of “jumper” bike seat complete with dummy handlebars; just after that and somehow similar, a man on bike with his dog on his back in a kind of papoose; a well-built (for a man) young, black man jogging diligently, sweaty, naked to the waist, with an older white man, white hair, just as diligently, coasting furtively just behind him, riding his brake so as to keep in pace, but always just behind, the jogger – this man had upon his face, I have to say, a kind of lascivious gaping grin and did not take his eyes off the jogger – dirty old man!; a Hassidic couple -man, the usual – woman, the usual but very young and with strangely sexy painted face!; a man in what appeared to be 3D glasses standing alone beside his idle bike and yelling at it; a group of “punks” stopped, sitting and having a picnic mid-span; a young blood on motor scooter with powerful stereo a-blasting.… And all of it, today, in what was the most perfect light of a dying day I have seen in quite a whiles, the likes for which Venice is famed and that which would make Tintoretto himself proud, the dome of the old Williamsburg Savings Bank, at the Brooklyn end of the bridge a veritable Basilica di San Marco…..OK, nah. Now I’ve gone too far! But it really was gorgeous.

It really isn’t ceasing to entertain me, day in and out. The different-ness. The same-ness. The evening ride is, for the most part, differently every day. The morning, samely: S/He is always there! – Mrs. Mick. Caught her coming back again this morn. She smiled…

Only two individuals of note today upon my bridge: She who remains nameless yet becomes oh, so familiar, coming the other way again (she must be starting earlier). Exchanging smiles, again, we have entered a tacit relationship of diurnal camaraderie that makes us feel at home. Would that she were my type or even age group, this could be the blossoming of some romance. I suppose it is in a way. And upon repeated scrutiny, I have to retract the Mick Jagger comment and say that she is more in the Joan Rivers category which, at least, is more befitting her gender! The clothes are the same. I realized that I too am in the same clothes every day. We grow closer daily!

The other, on the way back stood out from the crowd,  de facto. Or should I say “over” the crowd? A dark and handsome man, rugged type, on a tall bike of a kind seldom seen in that species. One that could have been made in some Swiss shop for the fabrication of such machines (if there is such a place), so elegant and perfect is its design. We began the assault of the bridge together, but I was left immediately in the dust, his power ratio a bit more leveraged than mine, and (more likely) his having-just-pedaled-across-the-eastern-1/3-of-the-country-on-his-tall-bike thighs having a sizable advantage over my chicken legs. Indeed, he left everyone in the dust! There he sat, waiting for me on the other side leering gently down at me like the Cheshire Cat, foot resting atop a lamp post, balancing his self-made beautiful machine, my friend and workmate.

These are my people.

Rode me the bridge, over and back.

Back to be one eye of ol’ Two Eye Jack.

Over saw she who daily needs must.

Back with a rider who left in the dust.

Well, there was the morning I had a hangover and was late to the bridge. I didn’t see her, was quite out of it all day and back across. Saw her the next morning (she was wearing a different shirt!).
Today, on the bridge (didn’t see her again) I DID find Batman’s discarded eyecuff! I hope he’s OK….

Long weekend (not long enough!) of abandon, well-deserved.
Night ride over my bridge, under my moon.
How many crossings have I yet
Over this one river?

How long will this go on, you ask…

Balls! to consistency. Not much for it evidently.
I’ve dealt with much lately from misery to madness, the melancholy and mundane.
The bridge still beckons and I answer astride it. She is still there. We smile every day!
Work, work, work…

Grey gives to grey. The Fall is upon us who lie where It falls.
Pale haze of muggy Manhattan welcomes me home to Work from far off Play where wildness wed wonder.
Much love to all back West who joined in the joy of Chicken and Eileen’s nuptials! A finer, funner wedding has ne’er been had, I daresay!
A substantial bridge they’ve crossed, and I, my comparatively lesser one, so do cross again and again. It’s all downhill from here…

And so I continue….

6 Responses to A chapbook for a Bridge…