A chapbook for a Bridge… By the pricking of my thumbs…. 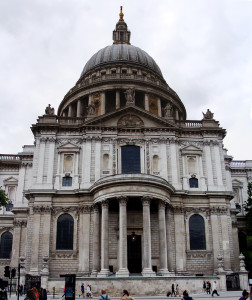 As I may have noticed, I haven’t had much going up on this ol’ website for a bit. (I say “I” because I don’t believe anyone else looks at it. But that’s what the personal website is for, ey? A kind of “online mirror” in which we find ourselves always the prettiest of them all and help ourselves to feel ever-so important! An eternal memory bank that keeps our passing thoughts like no brain ever could, forever – or at least until some Russian takes over the domain name) Well, why, I ask, this absence? Hah! I think I know…. 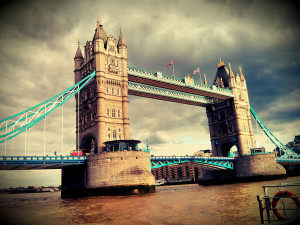 It is that I had finished with my labors of the last couple-ish years, building Audacity Itself in New York’s Lower East Side, which had me so daily on that bridge of fame and fable of which I spake here before. That being done, I was off to play in the hills of California at the nuptials of yet another two finely matched brilliant folks, a wedding (as all of my friends’ weddings seem to be) to rival most! (We should organize a Battle of the Weddings at some point!) And then, off I was to Europe.

Europe, the land of our fathers. Europe, the world of old. Europe, from whose teeming shores we are the spawn! Well, back upstream I came, and from the foetid waters of London I sprang, ready for the summer rut (sorry for the miscegeny, those who noticed) ! But there’s not much of a summer in London, I can tell you – colder and grayer than even San Francisco’s for it never really gets sunny. Wretched really. I loved it! I’m really just taking the piss . It’s good fun to make fun of England’s weather. The English sure love to do it! Bloody glorious and lovely town though. 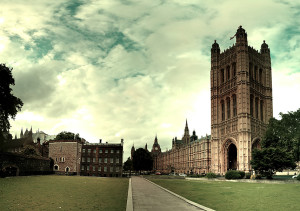 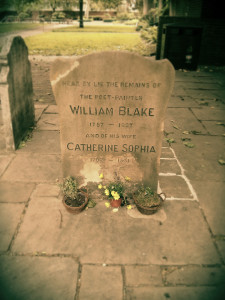 London, city of cities. London, the big smoke. London, home of heroes long gone. I roamed the Spitalfields and Whitechapel grounds of Jack the Ripper’s romp, saw a play at the National Theater performed by an excellent troupe from  New York in which a friend performs. Quite, quite good it was! Visited Shakespeare’s Globe (it’s a reproduction, but a good one, the original long gone). Roamed the streets visiting the obligatories: St. Pauls, Westminster, 221B Baker St., yadda yadda. At one point, in a moment of synchronicity that the old visionary himself would have appreciated, I even found myself waiting for a bus near a random cemetery and thought to myself how I’d like to find William Blake’s grave. So I went ahead on in to this cemetery, just for a lark, and lo and behold! The first grave stone I walked up to was that of the ol’ free-lovin’, angel seein’ codger himself! Boom! Felt special.

At Greenwhich Observatory, I marveled geekedly over it’s glorious scientific history and bought myself a damned nice pocket watch (I figured: what better place to by a watch than from where they invented time)! I drank quite a few pints (which one has to do rather quickly as the city shuts down early – like 11/12 at night!), ate of the fish and the chip, and then made my way up to Scotland. 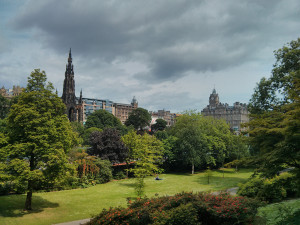 Scotland, land of bonnie princes. Scotland, of lasses and laddies. Scotland, where the Scottish live! More cold, more gray, more beautiful! Got in a bit of Edinburgh but mostly spent my time in Glasgee. Ach, aye, Jimmeh, tha’s where it’s at! Here it was my impression that every third person was a musician by the lot of them carrying instruments around. I guess, like Seattle, the more rainy a place the more you are forced inside to engage in something creative like music or suicide. Here more roaming in the groves and the streets, lunches of cullen skink, haggis and ale, lots of tea and fine conversation, modern art, free jazz and wonderful friends. Oh , dearie yes! What a time it was!

However, the heat of summer continued to call and I wasn’t quite finding it there. I knew from my experience of last summer what going further north would get me, so south I came, to the island of Malta!

Malta, of the crystal blue Mediterranean. Malta, of mysterious and mighty, religious and military past. Malta, where they speak Malti! There is so much here for a history geek like me to sink my brain-teeth into: some of the oldest, still standing neolithic temples on earth (older than the pyramids or Stonehenge)! built by… who knows?Then peopled by Phoenicians and Carthage, Romans and such, but always the Maltese, staunch and tenacious with their Semitic tongue like North African Arabic (yet written with “our” Roman letters) and their proud ways, home of the crusading Knights of St. John, the Knights Hospitaller, defenders of the faith. That being the one true faith. That being Catholicism.

This tiny island has fought off the Turks, the French, the Italians and Nazis and freed themselves of British colonialism, but in all it’s splendor, with all of its staunchly built bulwarks against the aggressor there is apparently a type of interloper it cannot keep out: an absolute swarm of Euro-trash on holiday with their Red Bull in one hand and cell phones in the other, drinking til they puke in the pool, listening to techno or grunting loudly their football anthems, wearing their gym clothes, flip-flops and military haircuts, or fashion catalog bimbo wear, tripping in the cobblestones on their 8-inch heels, and hanging out by the Burger King (of all places)! They are like swine in a bed of pearls! The Knights of St. John are surely rolling over in their poly-chrome inlaid marble crypts! Are these really Europe’s children? No! For children are the untrampled (hopefully) innocents, wide-eyed and glorying, un-judgingly at the world’s true wonders, casting no shadows being creatures of light. Rather, here are Europe’s “teenagers” (whether in actual earth-years or in the stunted growth of their tiny little minds) just beginning to show the fouled imprint of their close-minded elders, the “tired, poor, huddled masses”, the “wretched refuse from these “teeming shores” – No wait. It is we Americans who are the children of that lot, after all! Nor are we free of their imprint. – Are these, then, the children of Europe’s “storied pomp” this slack-jawed, bleary-eyed, soulless horde? Blech! They can keep ’em. Or is this the case all over the world? How, in so few years, do we go from bright-eyed, innocent, open minds yearning to be filled to being closed down, ignorant louts, hell-bent on speed, size, “style” and status! Where do they learn such value-less ways? That’s right: from their parents, of course. They are here too, to be sure. It is by no means my intention to say Euros have this any worse than ‘Mercans. It’s just what we do, isn’t it, when travelling, to bitch about the weather, the transportation, and, of course, the people. 🙂 Not to worry, though. After all, I know how to enjoy myself in the face of abject idiocy. I live in America!

For sure this lot can be avoided by venturing off into the gorgeous countryside, searching out private sea coves, silent walks down shopless streets, visiting the Knights’ quarters, the Inquisitors’ palaces, the dungeons and cathedrals, the inland walled silent cities, 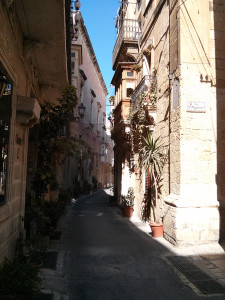 the rock walled farms. Not much grows here, but the country is covered with oleander and wild fennel, much like California. The rock is all limestone and soft for carving and there is quite a lot of that. It also makes for great cave and grotto makin’, all the better for the swimming and diving thereon! 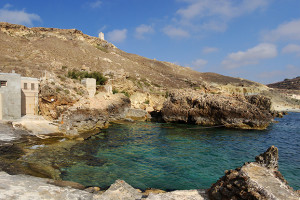 Fish and rabbit, snails and beer; it’s all good. A few days ago I hunkered myself down in an English pub (the Brits were here for some 150 years or such) that was the very bar where Oliver Reed died after drinking, let’s see…, 8 lagers, 12 double rums and half a bottle of whisky, the final draughts of which, apparently, were served to him while he was lying on the floor unable to get up. They are quite proud of this fact at the bar. Bloody irresponsible barman, if you ask me! I faired a little better, seeing as how they closed at 5:30PM!! Another early to bed town.

Anywhat, I continue to explore and write my masterpieces that I may return home laden with fruit and add another lump of time upon Life’s eternal fire.