By the pricking of my thumbs….

After scurrying about much in the last 5 months – from Europe to upstate New York, to North Carolina, to Pittsburgh, Western Maryland, Washington D.C., to the Poconos, and back with each iteration to New York City – I am finally headed back to my beloved alma mater to bathe but briefly in her kind, milky wash! It is being currently disseminated, and I shall further here confirm that my dip into the Bay will herald the appearance of the now rarely seen: 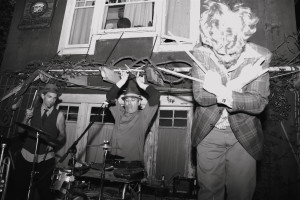 It has been a year since we last played , also for Halloween, and it smacks of a regularity which I must only submit to, being as I am so loathe to be regular at anything except bowel movements! And so be it that the junkyard band that gave new meaning to the phrase (once used upon us by a sound man in Chico) – garbage in , garbage out – comes to collect and recycle, so stick out your cans!

7 Responses to By the pricking of my thumbs….