Dogs and dinner, and the sounds of soul… The Road to Somewhere, a verbose and rhapsodic expounding of Joy amid the sorrow of Life…

Island of the Unicorn Hammer 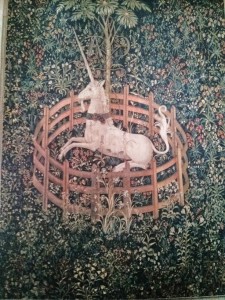 ‘No man is an island’- ol’ John Donne said, as gets pointed out ad nauseum. Indeed, no island is an island either, if you think of an island as an entity completely separated from all else. An island is merely a high point of the contiguous mass that stands out from the morass that exists at the all-encompassing ‘sea’ level. It’s just a hill sticking out of the water. The whole earth is, after all, one huge contiguous mass sitting in a puddle. Some of it sticks out; some of it doesn’t.  This more poetic licensed type of island is more a bastion of…o, let’s say, excellence or some singular outstanding-ness. I like to think of myself this way (Donne be damned!) Don’t you?  Manhattan is both these types of island. It’s perhaps more of the metaphorical island as the ideal above all other cities (or, at least it would like to think of itself that way) but, nevertheless, indeed it is definitively the literal island as well girded as it is by the Hudson and Harlem and East rivers (is the Harlem river really and definitively a river, though? More a creek, really) and then of course finishing as it does in its own harbor giving out to the great eastern ocean.

That pure ‘islands’, the symbolic ones, don’t exist among men or geography is perhaps what Mr. Donne intended to mean in his all-too-oft repeated phrase. Perhaps not. But, of course, it being so bloody oft repeated leaves it vulnerable to a multiple of interpretations as is the fate of many a cliché. So this, then, is my interpretation.

That hackneyed phrase settled in my skull today, being a painfully independent and solitary man myself, and while traversing the length of it (Manhattan) on my trusty by-sickle. For sure Manhattan’s east side, in the upper Harlem regions, leaps so almost seamlessly across that neighborhood’s eponymous ‘river’ into the Bronx that it’s virtually so indistinguishable (from land) that there is a even a break in that land. Unless, of course, you are at, or need to cross, said Harlem river. Then it is very obvious that a river (creek, I say) is precisely what it is, for without bridges or tunnel or a bit of a swim there would be no Bronx for you. Think of that tragedy! All this is to say that Manhattan’s nether northern end and its humble terminus at the little Henry Hudson Bridge is hardly the grand embarkation or stunning landing of its southern complement, but it is sure damn perdy, I’ll sure say that! And it’s not something one sees much of, unless one is a Columbia student or local resident of those lofty environs.

It was to those very environs that I ended up heading off after I woke up – or was woken up- of a Monday morning in my Brooklyn abode by the sounds of New York, which is to say to the sounds of construction – on an excessive and gratuitous scale – going on, as it does every day except Jewish holidays or sabbaths (which, fortunately for me, are many!) right outside my windows. I live on the street, so to speak, semi-submerged with windows opening onto the pavement of a street in a neighborhood of Hassidim, who are apparently compelled to be and have ever More. And in evidence of their tireless quest for More, my short block is currently host to no less than seven brand new (and ongoing now for the last year) soul-less, art-less multiplex abominations what they will call apartment buildings, being built separately, yet simultaneously to accommodate even more of that particular community’s progeny-obsessed population. Seven! Full scale, multilevel commercial building sites on one block! And to cap it off, on the next block over and backing up to our wannabe burgeoning lovely back yard, is yet another full-scale construction site! Surrounded like the six hundred in the Valley of Death! The noise and trash and dust are…extreme. But who am I to complain, though, working as I have in the construction biznez for so much of my own life? It is New York after all! If I don’t like it I could always head back to my California digs. Oh, wait – my Oakland place is also surrounded by construction on an even greater scale and currently threatened to be constructed out of existence! – It seems a curse I must suffer where e’re I go –  Well anyway, although I had otherwise no need to get out of bed early on a Monday morning in my current, all-too-idle condition, it was, shall I say, impossible to remain in it! So I got up, and my roommates being gone, battled the relentless and raging din with Mahler’s 2nd symphony at full blast. Fight torment with torment, I say! Fuck ’em!

I realized my neighborhood was no place for an idle man to remain, and so the Mahler being finished I headed off à vélo to quieter climes. Manhattan! Figgered I’d head way on up the west side and catch an organ recital at the Cathedral of St. John the Devine for a start. Hell, why not? Although a professed and confirmed atheist, I am no less a joyous one, and I take great pleasure in the grand acts of Man –  in music, art and stone, perpetrated though they are under the pretense of praising or appeasing his god. Why can’t we just be proud of what we accomplish on our own with our ingenuity, poetry and talent, learned and honed with our glorious and never relenting brains?! Is it reverse-vanity that demands us to require an invisible fantasy-father-figure who makes us do the things we do in order to be willing to admit any responsibility for such accomplishments? I find these contemplative acts and arts entirely appealing and compelling on their own, for an intelligent brain well merits some small bit of pride in them and needs no invocation of sparkly magic to justify their pursuit. But, I digress (indeed, that is all any of this is!) – Off to St. John the Devine and later the Cloisters on a bike, on a glorious Spring day (finally!) to take my godless ass into god’s haunts.

St. John’s is outstanding – like an island, it stands out. It is a grand cathedral after all. That’s what they do! They’re meant to inspire awe and make you feel tiny beneath the weight of His ever vigilant watch! Well, under the weight of all that architecture is more like it! “What has Man wrought”  is all I could think going through its apses, nave and chapels before settling into a  throne-like bench in the choir for the organ recital… which was lovely…except for the…wait, what’s this?…. horrid construction noise! It was profound and overpowering to say the least! Which is what the organ at S J to the D is, as you might guess. But the earth shattering  bludgeoning that was going on, apparently upon the cathedral’s very foundations, threatened to drown out the thundering diapasons belching out the Bach and Franck! The walls were shaking from it (not the organ)! To shake such a mass of stone is a formidable task, mind you. I wondered what the hell could they think is so important to be doing to the joint that warranted threatening to bring it down in the process! This is God’s house for fuck’s sake!! What could possibly need fixin’ that He couldn’t just wave His wittle hand and take care of? Turns out it had nothing to do with the glorious cathedral’s maintenance. There’s a huge thoroughly modern commercial residential multiplex building being built right next door, unfortunately sharing the foundation, and it will likely eclipse the cathedral’s north face when completed! There’s man all over for you: praising his god with one hand while covering that one up with his other where he then builds his soul-less temples to Mammon! So much for humility before the almighty daddy! Alle-fuckin’-lujah!

So, leaving the skull crushing noise of this blessed and bloody gorgeous house of prayer, and apparently ignoring (as far as you’re concerned), but in actuality not ignoring the 2 giant phoenixes cluttering the nave (check out the ‘sphere photo’ on the G+ link), I still had to continue my search for peace. Out through Morningside and up to the Cloisters at the very end of the island.  It is, after all, a favorite place for retreat, cloistered as it is from the outside world of lesser Manhattan. At least here in this medieval enclave  I was at peace, what with the few blue hairs and odd tourist silently strolling the promenades and gardens and sitting in the sun reading their Hildegard de Bingen poetry (I imagined). The only notable sound in fact, besides the imaginary lute twittling away in my head, was a nine year old girl telling one of the elderly docents that she was on a secret journey there from Pennsylvania, Frog Creek or some such place, with her (evidently invisible) ten year old brother, and no one was to know! It was secret! – I would have loved it if she had been telling that story to me. The docent only wanted to talk about places in Pennsylvania he had been and then grew quickly bored with the fantasy speak.

No worries. Peace is what I had come for, and that’s what I got, especially when I became transfixed by the hall of unicorns! – Anyone who was present for my spate of delirium logorrhea that I passed off as Performance in Virginia City, NV back in February will know of my unbridled passion for unicorns! Right??! – For it is the unicorn tapestries that the Cloisters is ‘famous’ for. There’s the one that is simply everywhere and everyone has seen: of one of the poor spike-headed horsies all corralled into a pen (which I first knew in the wayback machine as the cover of a John Renbourn album ). But no fair! Unicorns are born free and free they should remain! But those medieval bastards who dreamed up the damn things, no doubt, did so apparently so that they could also dream up themselves hunting the poor creatures down, capturing and torturing them no end! ‘Cuz that’s what the walls are covered with in the unicorn room of this blessed retreat! Ah, nothing puts me in the mood for sacred reflection like seeing a unicorn being sodomized by a man with his pike while dogs attack and chew at its pristine white flesh while the other guys surround and wait there turn with their flaying knives! Yay us!  If only mankind’s morbid passion for violence were just a fantasy and unicorns were real, life would just be so much better, methought. 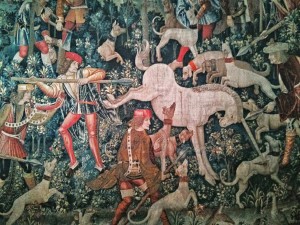 My reflection becoming too bright for my mind’s eye, I made off for the land’s end there and thence back down along the mighty Hudson (now, that’s a river!) running itself seaward beneath the Jersey Palisades, somehow at peace finally with a head full of jack-hammers, islands and unicorns all having at each other in a kind of sacred sodomy daisy-chain, off to sup at New York’s ‘oldest bar’ back in the lowlands down, downtown, and thence a bridge and Brooklyn bound was I, home  to Hissidim, hell, yet no high water. Not yet!

Let this trivial day’s log stand in somehow for the lack of any other news (though there has been much) presented here for so long….  fp

6 Responses to Island of the Unicorn Hammer